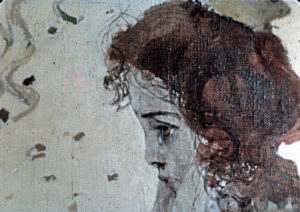 Witold Wojtkiewicz was Ficowski’s third “Great Mythmaker” and aesthetic master alongside Schulz and Leśmian. His fascination with Wojtkiewicz dates back to when a young Jerzy saw a National Exhibition catalogue and an issue of the Museion magazine with reproductions of the artist’s works in his father’s library.

Ficowski’s study of the painter’s legacy and biography began in the 1980s, after he had received copies of Wojtkiewicz’s letters from the famous actor and art collector Leonard Pietraszak. He even made unsuccessful efforts to recover Wojtkiewicz’s letters and diaries from the graves of the painter and his mother. His remaining correspondence, however, as well as satirical feuilletons signed “Wit-Woj” and reproductions of his works were included in Ficowski’s W sierocińcu świata (In the World’s Orphanage), a pioneering book on Wojtkiewicz, later reissued as the Witold Wojtkiewicz Album. The book contains a series of essays providing an in-depth insight into the nature of Wojtkiewicz’s sceneries and characters.

Ficowski’s poem Zmierzch o świcie (Dusk at Dawn) is also dedicated to the memory of Wojtkiewicz.