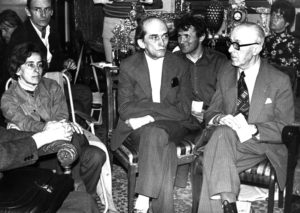 Ficowski recalled spending the time shortly after the war in “the dungeons of secret police, military intelligence and counter-intelligence”. By 1951, he had been arrested and interrogated on numerous occasions, but consistently refused to co-operate with the communist regime’s secret police. He later became involved with the democratic opposition.

In 1975, he was a signatory of the ‘Letter of 59’, an open letter from a group of Polish intellectuals objecting against changes to the Constitution of the People’s Republic of Poland and demanding democratic freedoms. The authorities retaliated by banning the publication of any of his works for a period of four years. A volume of his poetry Gryps (Kite), along with two cycles of poems Przepowiednie (Prophecies) and Pojutrznia (Morning Prayer), which came out at that time, were underground publications. In 1978, at the invitation of Jan Józef Lipski, he became a member of KOR (the Workers’ Defence Committee), an opposition organisation defending workers against government repression. He participated in court trials of workers prosecuted for participating in labour protests, and also edited the organisation’s publications. At the same time, he was a co-editor of the underground literary quarterly Zapis.

He explained his political involvement in a similar way to how he had justified his earlier participation in the Warsaw Uprising. “I stick to my own turf,” he said, “but sometimes you simply cannot hold back from getting involved.”