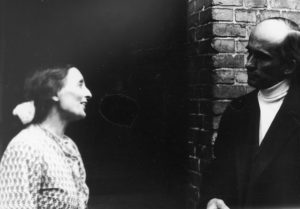 In his youth, Ficowski was already fascinated by the culture of wandering Gypsies. He saw it as “something that is very close, but hides the truth about itself.” He started to study Gypsy culture at the time of the German occupation, buying books and dictionaries in used book stores. From the very first years after the war, he started to collect information about the Gypsy Holocaust.

In the late 1940s and early 1950s he travelled with the Gypsies to escape from the secret police. When living in their caravans he met Bronisława Wajs, better known as Papusza, a Gypsy poet who, unlike most of her compatriots, was able to write down her own poems. Their Polish translations, which Ficowski soon started to publish, became a major literary event, partly thanks to the support of Julian Tuwim. However, they brought a curse upon Papusza from fellow Gypsies, who accused her of betraying Gypsy secrets. The distress led to physical and mental frailties, but the two managed to remain friends. Ficowski felt responsible for Papusza’s crisis, as he later confessed in Demony cudzego strachu (Demons of Other People’s Fear), a collection of essays on Gypsies. He is also the author of a work on the Gypsy art of fortune-telling, entitled Pod berłem króla pikowego (Under the Sceptre of the King of Spades).

His book, which from the second edition onwards was entitled Cyganie na polskich drogach (Gypsies on Poland’s Roads), is regarded as a ground-breaking work in Gypsy studies. In 1949, he was the first Pole to become a member of the British Gypsy Lore Society.

Some of his successes as a songwriter (including the most famous popular hit Jadą wozy kolorowe) are also the product of his Gypsy inspirations. His collection of Gypsy folk tales entitled Gałązka z Drzewa Słońca (A Branch from the Tree of the Sun) was translated into numerous languages worldwide. Some of his poems, such as Cygańska droga (The Gypsy Road) or Śmierć jednorożca (Death of a Unicorn) are devoted to the fate of wandering Gypsies, Papusza talks about the Gypsy poet’s tragic experiences, whereas Modlitwa do świętej wszy (Prayer to the Holy Louse) is a tribute to the victims of the Gypsy Holocaust.