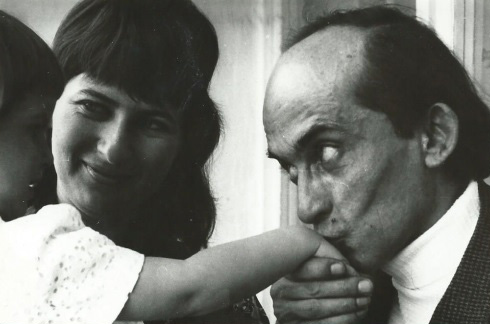 Ficowski married his first wife in 1950 – Wanda Komala (1929-2013), daughter of Anna and Tomasz, a WWI veteran killed in Auschwitz-Birkenau. A graduate of the Warsaw Academy of Fine Arts, an engraver and painter, the author of numerous exhibitions, Wanda Ficowska illustrated three of her husband’s books. Their elder daughter, Krystyna Ficowska-Klementewicz, is an English philologist, the younger one – Magdalena Ficowska-Łuszczek – is a poet and a writer.

In 1968, Ficowski married Elżbieta Bussold. She had been born in the Warsaw ghetto in 1942, rescued by a group of activists headed by Irena Sendlerowa and raised by Stanisława Bussold, a member of the Żegota, a Polish underground organisation dedicated to rescuing Jews under German occupation. Elżbieta’s parents, Henia and Josel Koppel (vel Koper), were killed by the Nazis. An educator, an author of books for children and a democratic opposition activist under the communist regime, in 2006 she was awarded the Officer’s Cross of Polonia Restituta, a Polish state distinction. From 2002 to 2006 she chaired the Holocaust Children’s Association of Poland.

Ficowski and Elżbieta’s daughter, Anna Ficowska-Teodorowicz, is a psychologist and currently the president and co-founder of the Jerzy Ficowski Foundation, a project initiated by Elżbieta Ficowska.